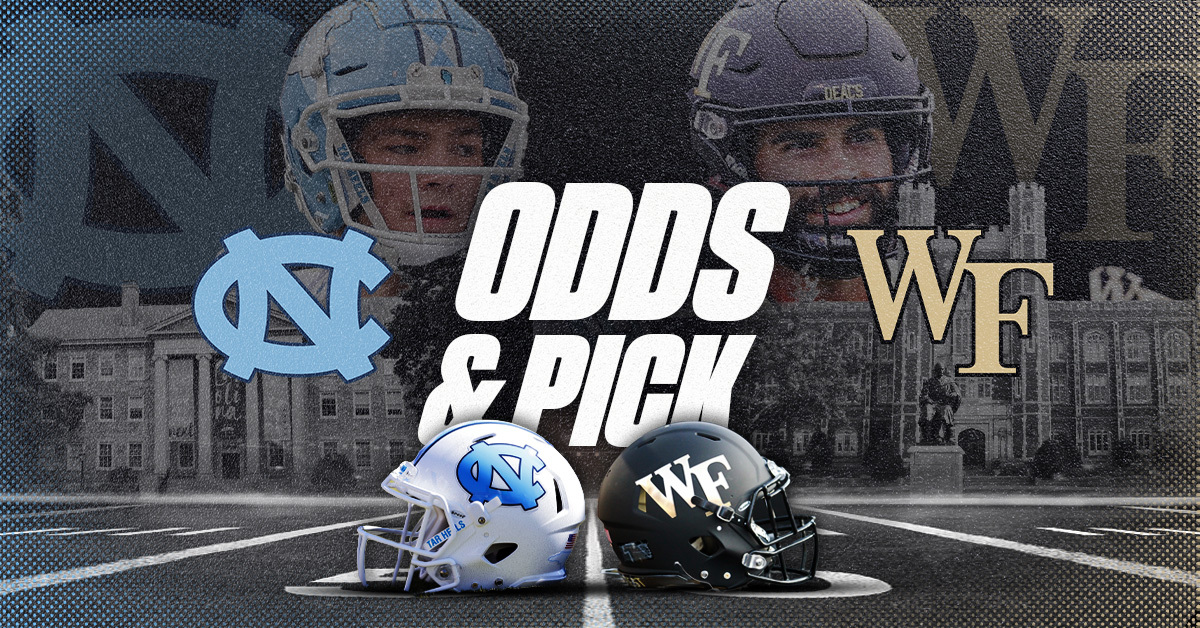 Week 11 of the college football season is here, and we have a big ACC matchup between UNC and Wake Forest on Saturday. The #15 Tar Heels are 8-1 on the season and 4-4-1 against the spread, while Wake Forest has played some good ball at 6-3 and 6-3 ATS. This game is being played at Truist Field at 7:30PM EST and will be broadcasted on ESPN2. We’ll take a look at the North Carolina vs Wake Forest odds to see who has the upper hand.

Drake Maye has put on a masterclass for this offense this season and he should be seriously considered in the Heisman conversation. Maye leads this UNC team in passing yards, as well as rushing yards. He has thrown for the 5th most yards, most touchdowns and the third best QBR in the country. Josh Downs is by far his favorite target, and downs has nearly 40 more receptions than the next closest receiver on the team.

The Heels score the 11th most points per game in the country, and average close to 500 yards on offense, and do an awesome job staying on the field on 3rd down, converting at the 15th best rate in the country at nearly 50%. Based on how good Maye has been, you think they’d be a pass heavy team, but that isn’t the case. They throw the ball 51% of the time for 9.5 yards/pass and 334 yards/game. The run game is serviceable, gaining 148 yards/game on the ground.

On the other side of the ball, Storm Duck and Cedric Gray lead a unit that gives up far too many points. They rank outside the top 100 in most defensive categories through the air and on the ground. The reason this total is astronomical is because of the points this team can give up. They give up almost 200 yards per game on the ground. I wont bet on this defense to stop Wake Forest too many times in a row.

Sam Hartman was able to recover and play much earlier in the season than expected, and he has this Wake offense in a good spot for the second straight year. Coming off back to back losses to North Carolina State and Louisville, I expect an inspired performance from the Deacons. They score the 16th most points per game, top 25 on third down, and throw the ball for 8.6 yards per pass.

Sam Hartman starts off OT with his sixth Pass TD of the day, tying the ACC single-game record 😳 pic.twitter.com/2kJsephCpX

Wake has a much better defense than North Carolina but unfortunately that isn’t saying too much. They rank 83rd in the country in points/game at 29.5 and give up close to 400 yards to the opposition. They beat the run pretty well at only 4.0 yards/rush but are giving up 7.5 yards per pass. When these two teams play, the stats go out the window and points are scored like leaves falling to the ground.

To me this game line doesn’t make much sense, and it feels like a spot that Vegas knows the right side of this and they want the squares to grub on a ranked team at plus money. For that reason, I like Wake Forest to bounce back after two straight losses and cover this number at 3.5. Additionally, I am going to take this over based on principle from their 112 point shootout in 2020 and their 113 point shootout in 2021. This game is one of the most fun games on the slate and should be must watch tv.