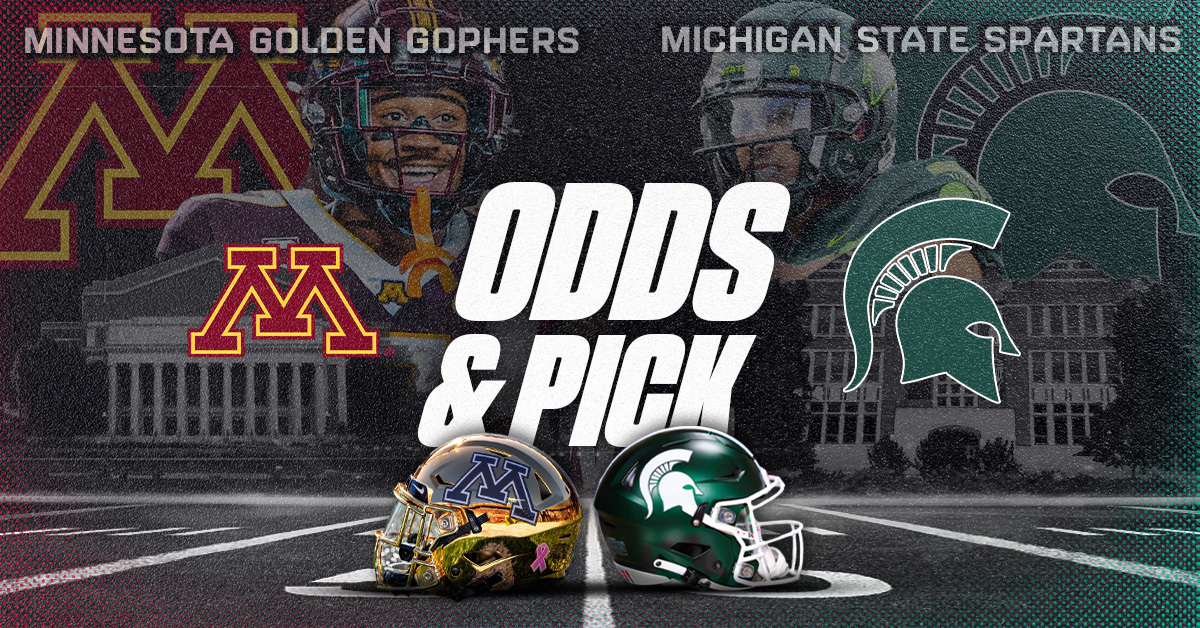 Last week, Michigan State traveled to the University of Washington and took their first loss of the season, losing 39-28. The Spartans will look to rebuttal against a Minnesota team who has shown no signs of weakness up until this point in the season. This is the first real test that the Gophers have faced, as they head into East Lansing with the number one ranked rush offense in the nation. The Gophers are short road favorites in the Minnesota vs Michigan State odds.

The game kicks off this Saturday, September 24th at 3:30 PM EST at Spartan Stadium.

Use the Caesars Sportsbook promo code ‘OWNERSBOXFULL’ to get a first bet up to $1,250 on Minnesota vs Michigan State.

Michigan sports betting markets list the Spartans at +126 to win outright in the Minnesota vs Michigan State odds. This is now back-to-back weeks that Spartans find themselves as underdogs.

Minnesota entered the season as +2800 betting odds to win the Big Ten championship. As of this week, they are at +1600 betting odds. The biggest drop in betting odds in the entire Big Ten. This is no fluke. The Gophers enter the week with a top two rushing attack in the nation, averaging 312 yards per game, accumulating 16 touchdowns on the ground in three weeks.

Mohamed Ibrahim returns with revenge on his mind after an injury ended his season in 2021. The Gophers have four players on their roster that lead the Power 5 in PFF College Football Grades for their respective positions.

Minnesota has yet to face any true competition but will have their hands full this weekend against Michigan State. A team that has shut down their opposition’s running game over the past three weeks, only allowing 89 rush yards per game.

The Minnesota vs Michigan State betting odds point to a higher scoring game than some would expect. But will Minnesota be able to exploit another team’s weak rushing defense for a fourth week in a row?

Michigan State has had a tough time replacing Kenneth Walker since he was drafted by the Seattle Seahawks. Their rushing game has been decent but nowhere near as explosive as we have seen in years past. As we have seen, the Spartans have mostly relied on their passing game to win games in 2022.

Their passing offense ranks top 50 in the nation, with 265 yards per game, including eight passing touchdowns. Michigan State did return veteran wide receiver and kick returner in Jayden Reed, who was regarded as a top 10 wideout in the nation last season but hasn’t shown the same kind of output that we saw in 2021.

Most TDs by a returning Big 10 WR:

The Spartans are looking to bounce back this week after a brutal beat down versus the Washington Huskies. They kick off Big Ten play at home and will look to attack Minnesota and control the time of possession. This will be tough to do when facing one of the best running backs in the nation and a Minnesota squad that leads the nation in Time of Possession.

For Michigan State, I am looking to see how edge defender, Jacoby Windmon, can potentially wreak havoc on Minnesota’s offensive line.

For Minnesota, I am looking to see how their two tight ends impact the running game, along with the passing game. Brevyn Spann-Ford and Nick Kallerup are both regarded as top five tight ends in the nation because of their ability to both block and catch passes.

I believe the key guys that Minnesota have on offense will turn out to be too much of a problem for the Michigan State defense to manage, I like Minnesota to cover the spread and do so pretty easily. With the Minnesota vs Michigan State odds being so low for the money line, I don’t hate just taking Minnesota on the money line if you’re scared to lay the points. Go Gophers!