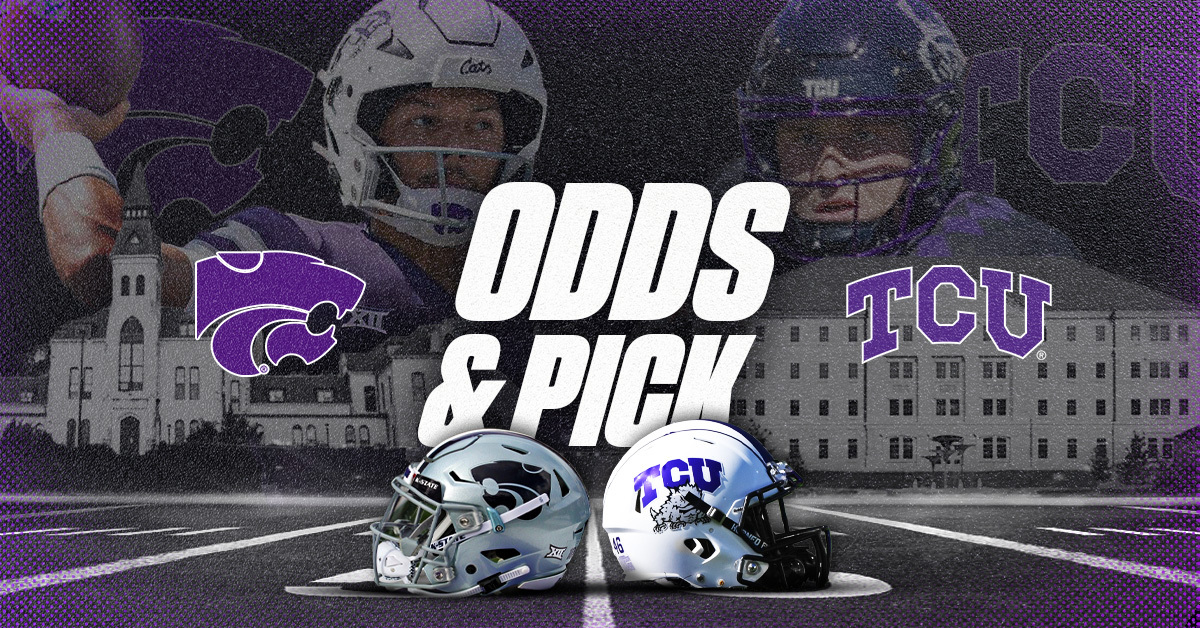 Week eight of the college football season is here, and we have TCU and K-State playing in a big time Big 12 game on Saturday. The 17th ranked Kansas State Wildcats are 5-1 on the season but 4-1-1 against the spread, while TCU has a couple good wins while being 6-0 and also 4-1-1 against the spread. This game is being played at Amon G. Carter Stadium at 8PM EST and will be broadcasted on Fox Sports 1. We’ll take a look at the Kansas State vs TCU odds to see who has the upper hand.

Kansas sports betting markets list TCU as the home favorites. K State is 1-0-1 ATS on the road this season, and TCU is 2-1 ATS at home.

Despite the fact Texas sports betting isn’t legalized, operators like BetMGM have been preparing for the potential of opening shop. Earlier this year BetMGM partnered with the Houston Astros. So although Texas sports bettors won’t be able to place a legal wager, they’ll still be able to watch Max Duggan and the Horned Frogs in a huge matchup.

Kansas State is a solid team on both sides of the ball. The Cats are ranked 66th in the country in scoring offense, but rank 20th in the country in scoring defense. None of their initial offensive metrics really jump off the board at you at the first look, until you get to their rushing numbers. They run the ball at the 11th highest rate in all of college football (61.88%) for 5.5 yards/rush and 234.0 yards/ game. These numbers make a lot of sense when you realize the talent they have in the backfield. Deuce Vaughan and Adrian Martinez are both efficient runners, and Vaughan’s rushing prop is set at 112.5 yards in the Kansas State vs TCU odds.

When we look at K-State’s defense and what makes them so good, opponents 3rd down conversion percentage is one of the best ranking 7th in the country at only 28.57%. Their defensive front doesn’t get run on too often, (23rd least in NCAA) but have respectable numbers against the ground attack. The best part of this defense is their ability to turn the ball over, as they rank 13th in the country in opponents interception thrown percentage. They will have their hands full but expect them to be up for the challenge.

The betting public loves this TCU team, and how can you not. The Frogs have the 4th ranked scoring offense in the country (43.2 ppg) and the 69th ranked scoring defense (28.4 ppg). This is lead by a great backfield combo in QB Max Duggan who has thrown for 1,600 yards and a 16:1 TD-INT ratio, and Kendre Miller has scored 8 touchdowns as the Frogs top back. TCU runs the ball the best of anyone in the country at 6.6 yards per rush, while only pounding the rock 36 times a game. Through the air, Duggan is super efficient, with the 17th best completion percentage (67.5%).

The Horned Frogs defensive unit has the ability to give up some yards and some points. On the ground, they are giving up 3.7 yards/rush which is solid, but are still giving up over 145 rush yards/game. K-State should be able to run the ball efficiently on this team. Through the air, they are only giving up a 54.17 completion % which is 9th in the country, but are giving up 7.2 yards/pass and 275.8 yards/game. Although I don’t imagine Adrian Martinez cutting up this defense, you can move the ball against them.

How many times in a row is TCU going to show up and compete their best in a huge game? I think this could be a let down spot for the Horned Frogs, against a K-State team that has a lot of juice. Looking at the betting splits the sharp money seems to be thinking the same thing and are on Kansas State. When we see the action on the total, the discrepancy on the bets and the handle show that the best money is also on this under, although to the eye you’d think TCU can score a million points on their own. Be different than the public, and let’s make some money on this awesome game.

Pick: Kansas State +3.5 and Under 53 at DraftKings Sportsbook