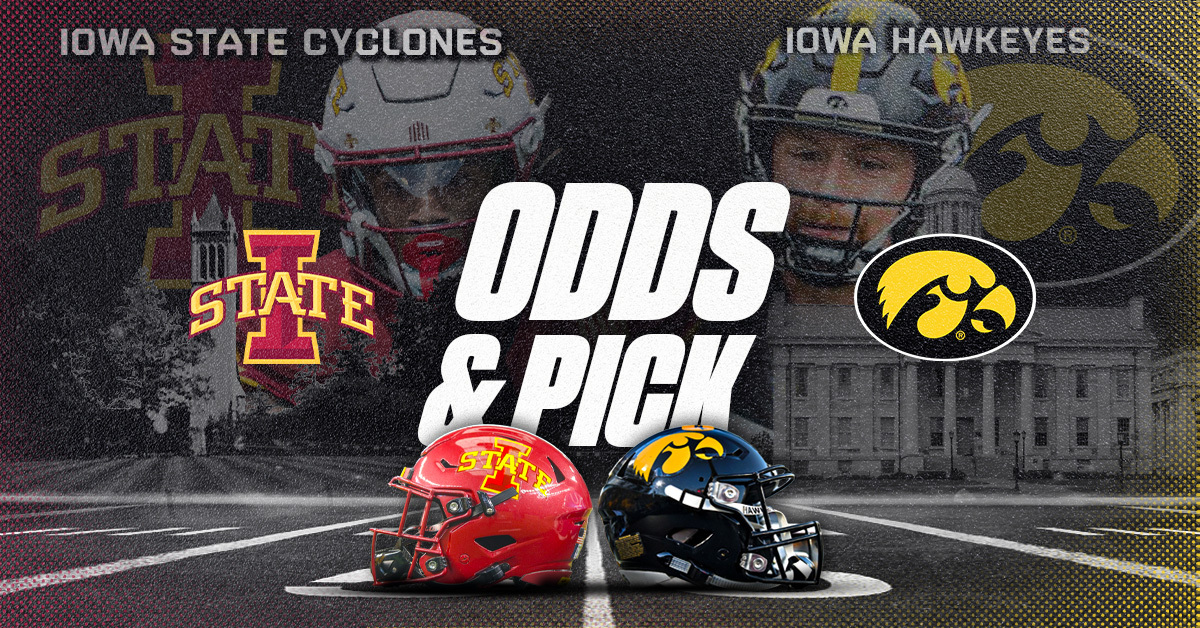 The Cy-Hawk Trophy is up for grabs in 2022. The trophy was first awarded in 1977, and since then the rivalry has continued to heat up. Iowa emerged victorious in 2021 beating Iowa State 27-17 as underdogs. This year, oddsmakers believe the Hawkeyes will repeat as 3.5-point favorites in the Iowa State vs Iowa odds. The game kicks off at 4 PM EST in Iowa City on Saturday, September 10th, 2022.

Let’s take a look at the Iowa vs Iowa State odds from Caesars Sportsbook, as we break down our best College Football betting pick.

New users who sign-up with the Caesars Sportsbook promo code ‘OWNERSBOX’ can unlock a $1,250 first bet, along with 1000 Reward Credits and 1000 Tier Credits.

Amongst Iowa sports betting promos, Caesars Sportsbook IA offers the biggest bonus. Be sure to lock that in if you’re betting the Cy-Hawk Trophy!

The Iowa State vs Iowa betting history has been quite one-sided recently. The Hawkeyes have won the last six Cy-Hawk trophies. As favorites in the Iowa State vs Iowa odds, there’s an obvious popular belief that they will win their seventh straight. Although, the College Football betting public are targeting the Cyclones with 66% of the total bets on Iowa State to win outright.

This cross-state rivalry is a really interesting one heading in. Iowa narrowly squeaked by South Dakota in Week 1 by a score of 7-3 averaging just 1.1 yards per rush attempt against the Jackrabbits. Quarterback Spencer Petras completed just 11 of his 25 passes for 109 yards, one pick, and no touchdowns.

Their defense was stout, allowing just 2.2 yards per play, but we’re also talking about the damn South Dakota Jackrabbits here. Iowa State did lose Brock Purdy and Breece Hall, however, their new offense rolled in Week 1.

Maybe Iowa should have made a few more recruiting visits over to Hawarden.

The Cyclones beat FCS Southeast Missouri State 42-10 behind Hunter Dekkers’ four touchdown passes. Dekkers is a junior who sat behind Purdy for a number of years as a four-star recruit back in 2020.

To put things into perspective, Dekkers had a 84.7 PFF passing grade in Week 1. Petras came in at 33.3 against a defense that allowed Colorado State to score 23 points last season.

Not to mention, the Hawkeyes won’t have it as easy on defense this week. Electric edge rusher Will McDonald IV didn’t get to the QB last week, but he had 11.5 sacks in 13 games which led the Big 12.

So, the Hawkeyes opened as 5.5-point favorites in the Iowa State vs Iowa odds, however, the number is now down to 3.5. There’s a good chance the public are taking the Cyclones because the Hawkeyes won without scoring a touchdown last week, which was the 15th it has happened since 2014.

Iowa has been able to squeak away with the win in this series the last few years, but I think the tides turn this year, and Matt Campbell finally gets his first Cy-Hawk Trophy. Iowa may be 6-0 in their last six matchups, but the Cyclones are 7-3 ATS in the last 10 Cy-Hawk Trophy games.

The under has hit seven straight times. With a lot of money coming in on the under, I don’t feel comfortable taking it at 40.0. If anything, I’d take the over at this point, but I’m staying away from the total altogether in the Iowa State vs Iowa odds.

Iowa sports betting apps list the moneyline at +150, which deserves a sprinkle, and take the points with the Cyclones on Saturday in Iowa City.