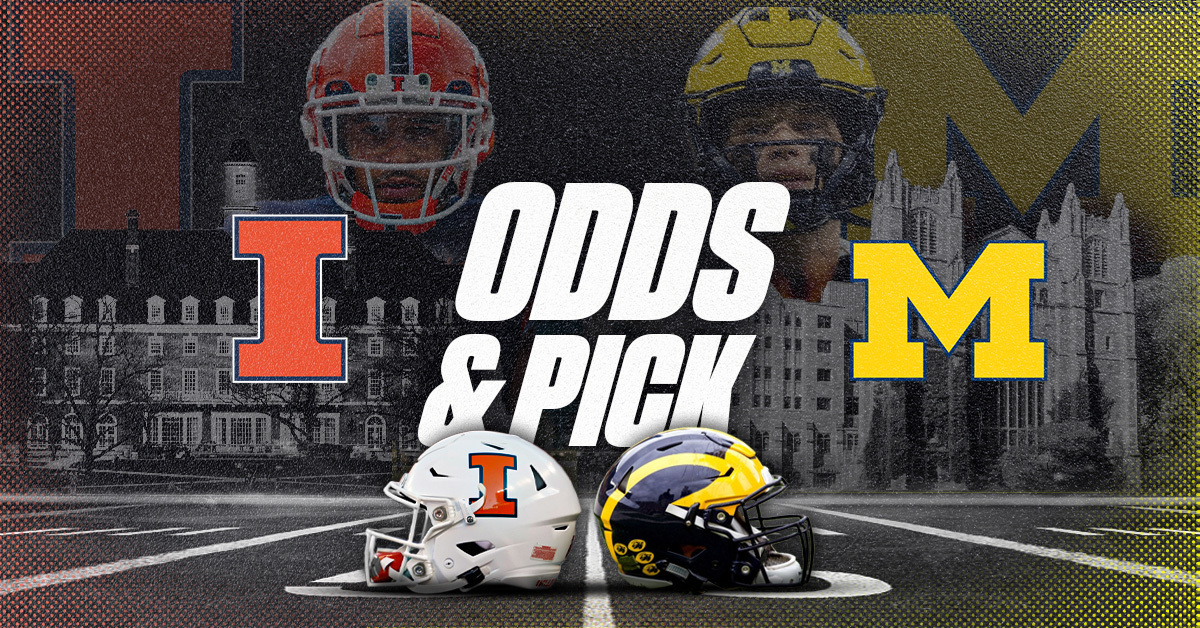 I experienced one of the most depressing thoughts earlier this week as I was preparing for another Tuesday night of MACtion, there are only two regular season weeks of the college football season. Watch as much football as you can friends, stay up and watch PAC12 After Dark, add another TV to your afternoon setup, soak it in. The Illinois vs Michigan odds for the betting total might indicate a less than exciting affair, but it’s football, and we love football.

Both the Illini and Wolverines are looking to keep their BIG10 Championship hopes alive. With a perfect 7-0 record, that opportunity is firmly in the hands of Michigan. But Illinois is 4-3, tied with four other teams in the BIG10 West. so they’ll need some help to make this happen. Let’s take a look at the Illinois vs Michigan odds before finding our favorite bet for this one.

Michigan sports betting markets list the Wolverines as 18-point favorites at home, where they’ve enjoyed at 4-2-1 against the spread record at Michigan Stadium. While Illinois is 2-1 ATS on the road in 2022.

While Illinois sports betting regulations don’t allow Prairie State bettors to place a wager on their local college team, there are many other college football games to bet on at DraftKings Sportsbook this weekend!

The Illini have lost back-to-back games and any good sports bettor should be looking for an edge when it comes to the injury report as that could be an indication for their struggles. The largest concern to most college football fans is start running back Chase Brown. But coach Bielema did say that the RB is “trending in the right direction”.

The bigger concern to me when it comes to handicapping this game is the defensive injuries. Illinois has been forced to go to out-of-position options at the cornerback spot. Free safety Quan Martin was moved to corner, as well as the elevation of true freshman Xaiver Scott to start across him.

The good news though is that the front seven remains largely in-tact, with the potential of returning linebacker Seth Coleman from a concussion. The Fighting Illini have the 4th best stuff rate in the country and allow just 4.0 yards per carry, ultimately ranking 2nd in opponent EPA/rush. That is an excellent recipe for competing with this run heavy Wolverines team.

Three of the five leading rushers in college football hail from the Big Ten.

This is “Run The Damn Ball” exemplified.

Michigan Looks to Avoid Look Ahead Spot in Week 12

It’s on the mind of all of us, a trip to Ohio Stadium awaits the Wolverines next weekend. I’m sure Jim Harbaugh has emphasized the importance of staying focused on the task at hand, as well as ensuring everyone remains healthy. Illinois will be no push over, especially when you consider how their major strengths matchup.

It’s not just the Illini that are great at stopping the run, Michigan has an excellent group too. Illinois is running the ball on 58.1% of plays, we’ll likely see 80+ rushing attempts in this one. The Wolverines rank 6th in opponent rushing EPA per play and just 4.1 yards per carry. They are the most disciplined tackling team in college football, with just a 4.3% missed tackle rate.

The offensive line is moving mountains for Blake Corum, allowing just a 16.1% stuff rate on the season. That keeps this team ahead of the chains consistently, they only have a 8.7% busted play rate on the ground. Chase Brown leads the country in rushing yards with 1,442 but Corum isn’t far behind with 1,349.

There’s a lot to consider coming into this matchup, an Illinois team at full health would likely see this spread down inside 17 points. But at the same time, these two teams play into each others defensive strengths. The difference will be who can move the ball through the air and that’s where Illinois is limited.

We’ve seen this Harbaugh coached team look to bully their opponents on the ground, that’s something that wears out opposing teams in the second half. The Wolverines rank 124th in pace of play, while the Fighting Illini rank 91st. This game will be very slow moving, which will keep this game from getting out of hand early.

I like the look we have on the first-half spread. Michigan hasn’t had a lead of double digits coming out of the first half in four of their last five games.