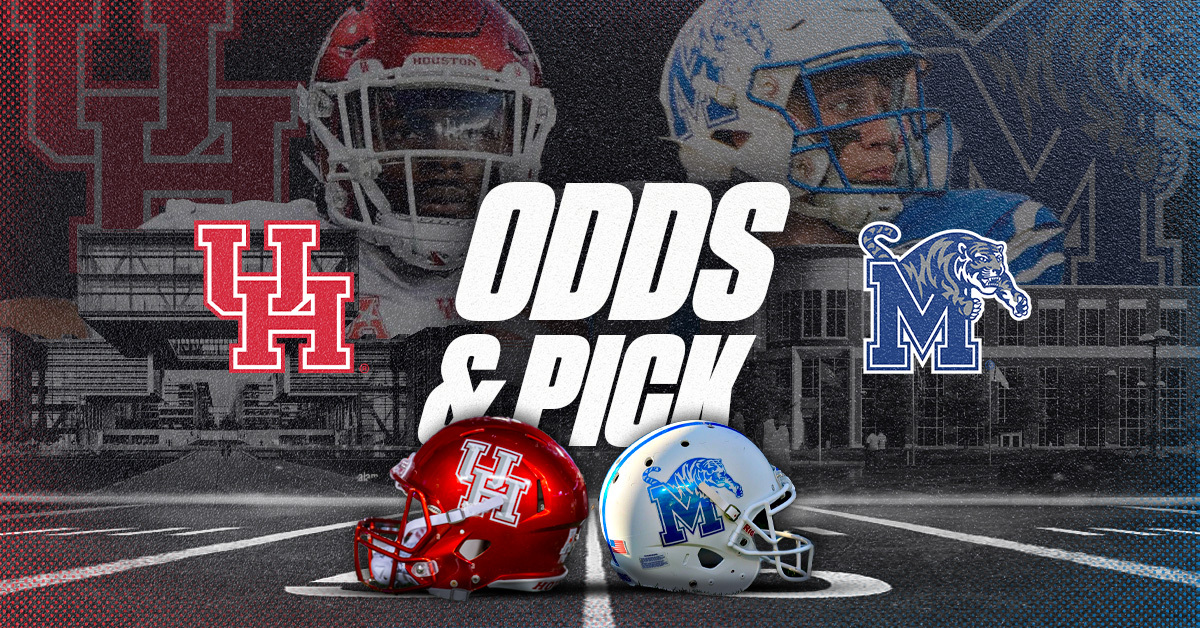 The American Athletic Conference is looking wide open after five weeks of the 2022 college football season. Memphis leads the way right now, with two wins in conference play. Meanwhile, the disappointing Cougs are looking for their first conference win after falling to Tulane last week. The Houston vs Memphis odds indicate they may not find it on Friday night.

It’s still early in the year for Dana Holgorsen’s team, but with a move to the BIG12 coming soon his seat could warm up if there are four losses in just six weeks of football. The Tigers are largely untested so far, with the exception of a 26-point loss to Mississippi State to open the year. Let’s take a look at the Houston vs Memphis odds before learning everything we need to know about these two programs.

Tennessee sports betting markets have seen this point spread line hover around this key number of 3-points. Over the course of the week it’s been at both -3.5 and -2.5, with Caesars Sportsbook having the best number for Memphis backers at -2.5 (-110) at the time of writing.

Although Texas sports betting is not yet legalized, industry leaders are still making themselves visible in the market in expectation of future legislation. BetMGM partnered with the Houston Astros prior to the 2022 MLB season in a marketing ploy to introduce themselves to Texas sports bettors.

This Cougars team had high expectations heading into year four of Dana Holgorsen’s tenure in Houston. Especially with the amount of returning production they had coming into the 2022 season. The defense has been a glaring weakness, allowing 409 yards per game. This is the worst tackling team in the country, allowing a 17.4% broken tackle rate.

On the offensive side, the passing game looks limited due to an offensive line that has struggled in pass protection. Their 30.4% pressure rate allowed ranks 104th in the nation. That’s kept the Clayton Tune from being able to push the ball downfield as their average throw depth of 6.8 yards is bottom-20 in college football.

ICYMI… Dana Holgorsen joined @johngranato and @LanceZierlein on The Bench and shared his thoughts on @UHCougarFB and that there's no other place he'd rather be. pic.twitter.com/EnXuHIH5CO

It doesn’t seem like the offensive line is as bad on the ground, but it’s still not efficient. Houston is averaging just 3.9 yards per rushing attempt. Brandon Campbell hasn’t done enough to keep them ahead of the chains. The line has done their part as their 19.3% stuff rate is top-25 across the FBS.

Despite some cupcake matchups against Temple, North Texas, Arkansas State and Navy the Tigers haven’t put up flashy defensive stats. There may be a sliver of hope for the Cougs offense as Memphis ranks 108th in pressure rate and 114th in sack rate this season. But as much as they’ve struggled vs the pass they’ve been great against the run, with the 12th best run defense grade from PFF.

The Tigers offense is very balanced, with basically a 50/50 split between the run and pass. Much like the Cougars though, their offensive line hasn’t been able to dominate their competition. They rank 93rd in pressure rate and 100th in stuff rate on the year.

Something that isn't getting talked about enough (although Seth Henigan did bring it up after Saturday's game):

Memphis currently ranks 2nd in the country in turnover margin. Big reason why the Tigers are 4-1 despite having the nation's 71st-ranked offense at the moment.

Quarterback Seth Henigan has done a good job taking care of the football, with 9 touchdowns to just 1 interception 166 passing attempts. Caden Prieskorn has been his most reliable target in the red zone, with 5 TD’s on the year. The run game has lacked explosiveness, averaging just 3.9 yards per carry.

The underlying numbers for this Memphis team don’t look nearly as good as their 4-1 season record. Their lack of ability to generate pressure and plays in the backfield is going be a major benefit for a struggling Houston front. Allowing more time for Tune to get through his reads and the ground game to be able to stay ahead of schedule.

One thing the Cougars have done well even before Holgorsen arrived is develop talented front four defenders. The problem has been tackling on the second level in 2022, but this is a Memphis team that hasn’t been able to make oncoming tacklers miss this season. Look for this defense to cause havoc at the line scrimmage, forcing plenty of negative plays.