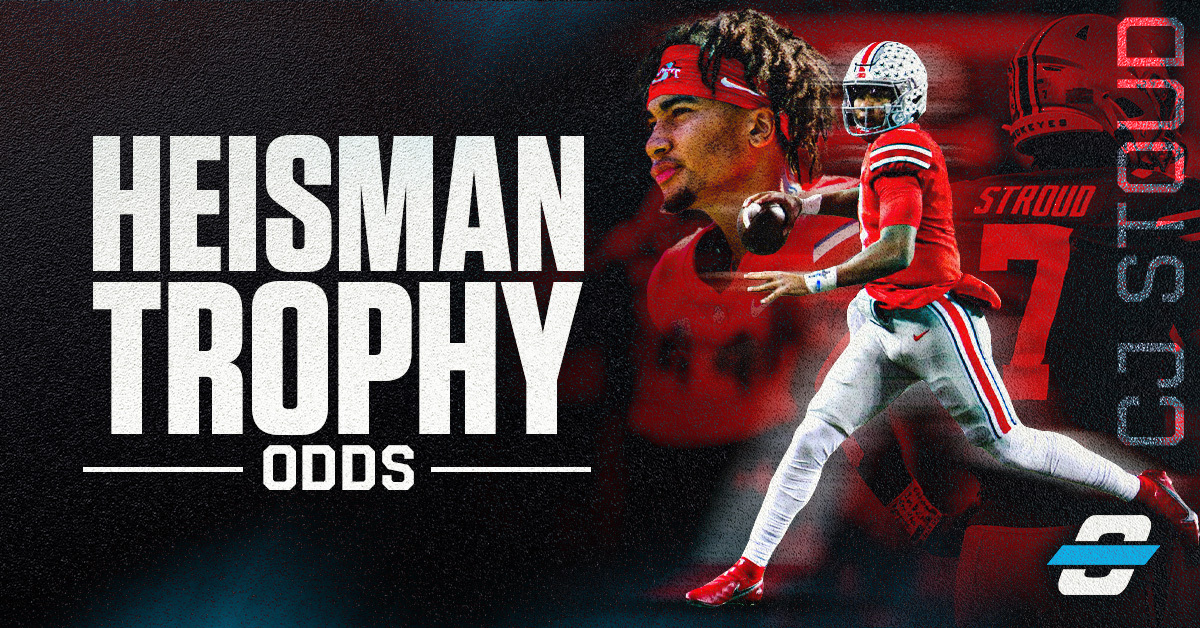 The Heisman trophy is an award given annually to the best college football player in the country, voted on by journalists and former Heisman winners. The Heisman is traditionally awarded to Quarterbacks or Running Backs, as only two players since 1997 haven’t played those positions and won the award. Most recently, Bryce Young from Alabama was awarded the Heisman Trophy. This year, CJ Stroud of Ohio State is the favorite in the Heisman Trophy odds prior to College Football Week 0.

Sign-up with the BetMGM bonus code ‘OWNERSBOX’ to claim a $1,000 risk-free bet to wager on College Football.

Favorites in the Heisman Trophy Odds

The three favorites in the Heisman Trophy odds this year are CJ Stroud (Ohio State), Bryce Young (Alabama), and Caleb Williams (USC). Let me start by making a case for Bryce Young not to win the award a second time. Only once in the history of the Heisman trophy award has a player won two times, and that was Archie Griffin (Ohio State) in 1974 and 1975.

Jaxon Smith-Njigba: the next WR to win the Heisman Trophy? 👀 pic.twitter.com/eYwfCHZEmJ

So, we can look at a player like Bryce Young the same way the voters in the NBA vote for MVP with LeBron James. Even when LeBron is the most valuable player, the voters tend to shy away from voting for him to win the award too many times in a row to mix it up, and for the same reason, I won’t be putting my money on Bryce Young.

If I was to pick one of the top three to put my money on, it would be CJ Stroud of Ohio State. Voting for the Heisman goes hand in hand with team success, and with the weapons that Ohio State has, they are in a much better spot than USC to make it to the National Championship. They are favored to seal their conference title in the Big Ten odds as well.

The Trojans team has had a lot of new pieces join the program with the arrival of Lincoln Riley, and need to find a way to get guys to make a stop on defense, while also having a hungry Utah team sitting atop of the PAC 12. There is no doubt all three of these players are incredibly talented, but for my money, it is going to be CJ Stroud’s award to lose.

Sophomore Tyler Van Dyke had an under-the-radar good season for the Hurricanes in 2021. Van Dyke threw for 2931 yards 25 TD/6 INT, and had the 11th best QBR in the country. A pro-style passer with a big arm, Van Dyke is ready to take the next step. My only worry? Mario Cristobal. How in the world did he allow Justin Herbert to stay with him at Oregon for four years? He had an incredible NFL talent and was able to suppress that talent enough that he played out his college football eligibility.

Should Van Dyke take another big step, the U could really be back and be on the verge of something special. For a flyer at +2500 with some big games early on in the season, should he lead Miami to victory, he should shoot up the odds boards.

Since I like CJ Stroud so much, I’m going to take a small wager on a guy that could make him so successful. Although there have been rumblings that NFL scouts don’t believe Smith-Njigba is a shoo-in first-round talent, he was the ability to dominate the college game. There is nothing more showing of that than his incredible Rose Bowl performance against a really solid Utah defense.

Jaxon Smith-Njigba’s performance in the Rose Bowl vs. Utah was out of this world ✈️

Smith-Njigba can impact the game in so many similar ways to Devonta Smith. Smith had 1,511 receiving yards and 98 receptions in 11 games along with 17 touchdowns. Last year JSN had 1,606 yards 95 receptions, and nine TDs, and out go to first-round receivers in Chris Olave and Garrett Wilson which should open up the passing game for a lot more work.

It is square, but I think Ohio State has a really good shot at a national championship this season, and if that happens it’ll be thanks to two guys. CJ Stroud and Jaxon Smith-Njigba. For that reason, I will be placing a UNIT on Stroud and half a unit to sprinkle on JSN to win the Heisman trophy.

Unfortunately, in-state Buckeye fans won’t be able to place bets on the Heisman Trophy odds this season, but when Ohio sports betting launches on January 1st, 2023 there will be plenty of other College Football betting markets available.