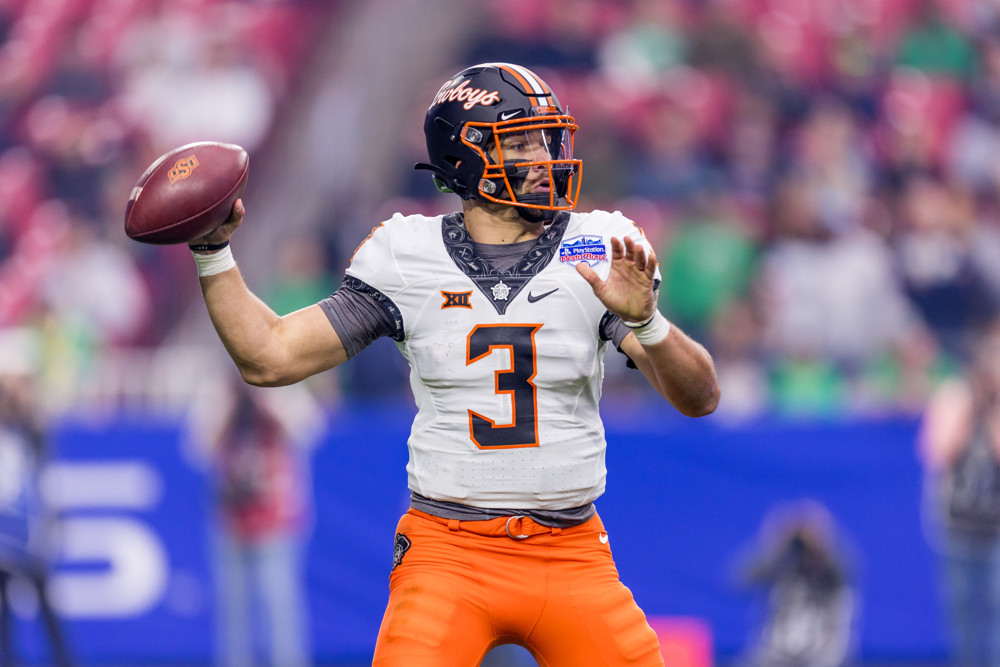 As we’re just a week away from the start of the 2022 college football season, there is a lot to learn when it comes to the new season. It’s always important to pay attention to returning production, that plays a big role in these college football win totals to bet this season. Unlike the major professional sports, previous year results don’t necessarily indicate a bright future for the following season.

When betting on college football win totals you must shop around for the best numbers. Getting a half win knocked off or added to the posted total can be a massive difference maker in a 12-game season. I’ll be listing where I got each of these win totals as well as their prices at the sportsbook. Check out the best online sportsbooks for deposit bonuses and free bets this CFB season. Users in Kansas online sports betting markets can also start betting College Football on September 1st when sports betting apps launch.

It was a big season for the Cowboys in 2021, but ended in disappointment as they were less than a yard short of a BIG12 Championship and likely a berth in the College Football Playoff. A lot has changed since that game in November, especially on the defensive side of the ball. The defense was their bread and butter in 2021, I’m not sure that will be the case in 2022.

Defensive coordinator Jim Knowles put together a masterclass performance coaching the Pokes, the team was 4th in opponent yards per play at 4.3 and 10th in opponent points per game at 18.2. His departure is one thing as his scheme worked wonders but the Oklahoma State defense returns just 37% of it’s production from last season, which ranks 128th in the country.

Derek Mason replaces Knowles, but considering the absences I think there is going to be a steep drop off. Oklahoma State usually relies on Mike Gundy’s high powered offense but that hasn’t been the case with Spencer Sanders at the helm. Sanders heads into his senior season after posting the lowest YPA of his career at 7.2 and a 20/12 TD/INT ratio. Don’t expect his play to take a drastic change in his 4th year starting, he is who he is.

They’ve got four difficult road games on their schedule at Baylor, TCU, Oklahoma and Kansas State. Hosting a talented Texas team in October won’t be easy either. The Cowboys are ranked 12th in preseason AP poll, I don’t see them being ranked by the end of the 2022 college football season.

This is a great example of where line shopping can pay dividends, as the majority of sportsbooks have the Utes total at a flat 9.0. But you can find 8.5 at PointsBet if you’re willing to pay the juice, which I think it’s certainly worth here. Utah has three toss up games on their schedule in Florida, USC and Oregon. They’re favorites against Florida, at home against USC and absolutely tortured Oregon last year. Even losing those three games would have them at 9-3 but I could easily see them 2-1 or 3-0 in those games.

In what is typically a pretty soft conference on the defensive side of the ball, but that isn’t the case for the Utes. The defensive line may be young but it’s plenty talented and has experience, Junior Tafuna was the PAC-12 Freshman DPOY. They ranked 11th in stuff rate and 28th in sack rate last season. They’ll also benefit from getting some key starters back from injury in the secondary with Zemaiah Vaughn and JeTravis Broughton.

After an 8-5 season in Nevada last year the Wolfpack find themselves with a total nearly half of that and I think that’s about right. This program is a complete and utter dumpster fire after losing Jay Norvell to conference rival Colorado State. If your head coach leaves for a team that finished 3-9, that’s a major red flag.

The Wolfpack are last in the country in returning production, with just 20% on offense and 34% on defense. The departure of Carson Strong and Romeo Doubs to the NFL and wide receiver Elijah Hicks heading to CSU with Norvell is concerning. Whoever gets the ball at QB will be throwing to a wide receiver group that is barren, with the most returning production being 14 catches.

Ken Wilson was promoted to be the head coach and the offensive system is going to completely change. After running air raid under Norvell it’s expected to be a much more run oriented scheme. But they’re going to be running the ball behind an offensive line that doesn’t return a single starter.

Nevada has a light start to the season with New Mexico State, Texas State and Incarnate Word, but with this roster those are no guarantees. They could very well go winless in conference play as their most winnable games against Hawaii and UNLV come on the road. Do yourself a favor and head to the Caesars Sportsbook to fade this depleted group.