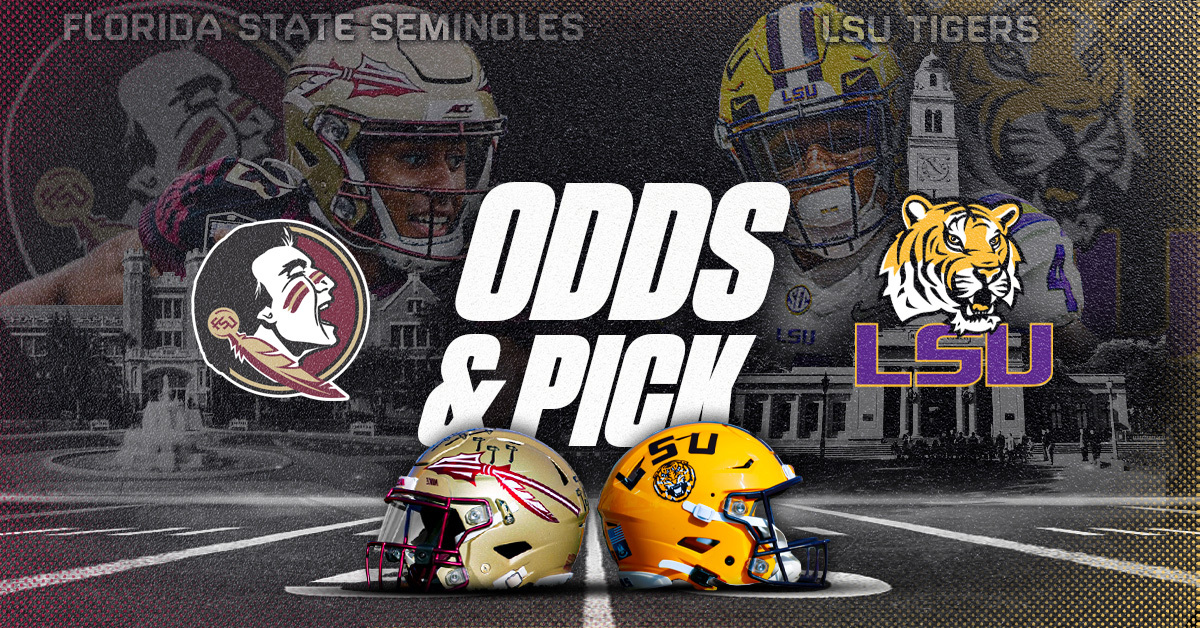 There’s no better way to kickoff the college football season then getting five straight days of CFB. Florida State and LSU will keep that train rolling in a prime-time spot on Sunday night at the Caesars Superdome in New Orleans. It will be the first time these two historic programs have met since 1991. With both teams desperately needing to bounce-back after losing seasons the Florida State vs LSU odds are tight.

New users at Caesars Sportsbook Louisiana can place a wager in the Florida State vs LSU odds and get up to $1,250 in bonuses along with 2,000 in reward credits. Use Caesars Sportsbook promo code ‘OWNERSBOXFULL‘ to unlock this welcome offer!

Louisiana sports betting sites aren’t exactly on the same page when it comes to the spread, which is on a very key number in college football betting at 3 points. Those looking to back the Florida State Seminoles are best served to head over to BetRivers as they have the Noles odds at +3.5 with a price of -114.

Caesars Sportsbook is providing new users with a $1,250 first bet! You can back the LSU Tigers to cover as 3-point favorites and place a wager of $1,250 to win $2,300. If they fail to cover the spread, you’ll receive the amount of your wager back in free bets. As well, all users that place a pre-game wager on the moneyline or total of at least $50 will be entered to win a pair of tickets to Florida State vs LSU, courtesy of Caesars Sportsbook Louisiana.

Year 1 of the Brian Kelly Era at LSU

Brian Kelly will be making his debut as the new head coach in Baton Rouge after leaving Notre Dame back in November. After what was a tumultuous final season under Ed Orgeron there is still plenty of talent on the roster along with incoming transfers. Kelly hasn’t officially named his starting quarterback, with Arizona State transfer Jayden Daniels and redshirt freshman Garrett Nussmeier vying for the job. Kelly is known for rotating QB’s so that should be the expectation in this one but Daniels may have the leg up.

Brian Kelly said #LSU has made a decision on the starting QB, but will not announce it publicly.

Wants to keep that tactical advantage over FSU this week.

Whoever it is that is under center they’ll have one of the most impressive receivers in college football to throw to. Kayshon Boutte wasn’t available for much of last season due to an ankle injury but he’s expected to be the next best in the country behind Jaxon Smith-Njigba. The cause for concern on offense is on the offensive line, the group ranked 89th in average line yards last season. Kelly announced the starters and he’s relying on true freshman Will Campbell at LT and the only senior is East Tennessee State transfer Tre’Mond Shorts.

The defensive line is probably the most talented unit on this team, there is NFL talent littered all across it. I’d expect to see Ali Gaye, Jaquelin Roy and BJ Ojulari to be selected early in the 2023 NFL Draft. Then there is perhaps the most exciting player in Maason Smith as a former 5-star recruit. In what was already a top-40 unit in both stuff and sack rate last season I’d expect them to be one of the best in college football.

Mike Norvell kicked off his third year in Tallahassee with a win in week 0, year three is usually where the rubber meets the road for college football head coaches. The Seminoles benefit from having the 11th most returning production in 2022 college football. 90% of their defense is back (2nd) and 74% of their offense (41st). This is what year three is about, having the your pieces and your recruits in place.

The FSU pass rush was really good in 2021, but now loses both of it’s ends in Jermaine Johnson and Keir Thomas. There is still plenty of talent to work with in Albany transfer Jared Verse as well as at the tackle spots with Fabien Lovett and Robert Cooper. The issue was the secondary giving up far too many explosive plays, it’s an extremely talented group that needs to start meeting expectations.

The Noles offensive line remains largely in tact with plenty of veterans. With Jordan Travis at QB you can expect this Florida State team to rely on the run plenty. Treshaun Ward at running back makes for a good tandem. But don’t expect Travis to make a lot of plays with his arm, he averaged less than 20 pass attempts per game.

Jordan Travis struggles as a pure pocket passer, their strength is in the RPO rushing attack with him and Ward. The problem is that LSU may have the most talented defensive line in the country. I also have high expectations for this Seminoles defense with their returning production, while the Tigers will be operating with a suspect offensive line in front of a likely duo of QB’s.