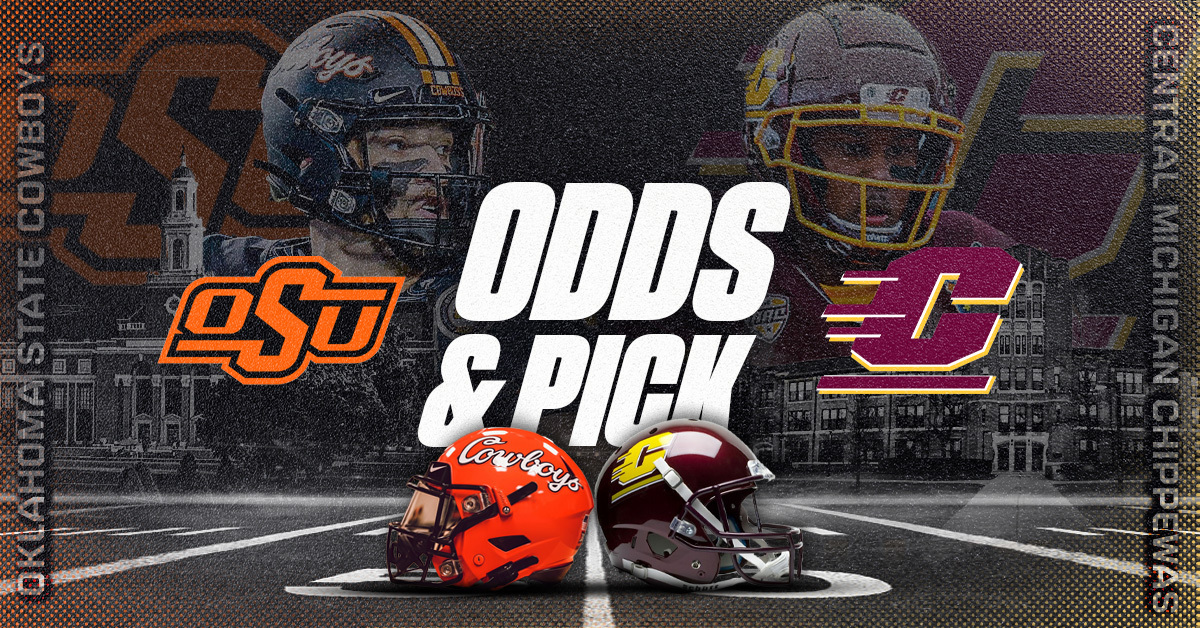 A full slate of college football for 2022 kicks off on Thursday night with 16 games featuring FBS programs. Both the Chippewas and Cowboys weren’t playing in week 0 so this will be the first time these teams touch the field. We’ll take a look at returning production for both sides and how it impacts the Central Michigan vs Oklahoma State odds for September 1st in Stillwater, Oklahoma.

The Chips finished with a 9-4 record in 2021, winning the Sun Bowl over Washington State. Head coach Jim McElwain hasn’t had a losing season since inheriting this program in 2019 after a dismal 1-11 season. Mike Gundy’s Cowboys are coming off a BIG12 Championship game appearance and a near playoff birth, finishing 12-2.

Michigan sports betting sites list the Chippewas as significant underdogs on the road, but the last time these two teams met Central Michigan walked away with an outright 30-27 win. CMU’s team total sits at just 18.5 points at DraftKings Sportsbook Michigan, with the over priced at -110 in the Central Michigan vs Oklahoma State odds.

New users at DraftKings Sportsbook that place a $5 bet on college football will instantly receive $200 in free bets! A $5 wager backing Central Michigan on the moneyline pays $50 at DraftKings.

To the surprise of many college football fans, the Cowboys were led by one of the country’s best defenses in 2021. That typically can’t be said about a Mike Gundy coached squad in the BIG12. But this defense won’t look anywhere near the same in 2022. The Cowboys have the 4th least college football returning production in the country on that side of the ball, with only 37% returning. Not to mention, defensive coordinator Jim Knowles left for the same position at Ohio State.

Derek Mason is stepping into the role as DC, so they’ve got an experienced and former power-5 head coach calling the plays. The defensive line is pretty well completely in tact, highlighted by defensive end Brock Martin. The problem is in the secondary and at linebacker, where the cupboard is barren when it comes to experience.

💸 Mason will still be the highest paid assistant in Oklahoma State history pic.twitter.com/m23JexPCmN

So if the defense isn’t at the level it was at last season, can the offense take a step forward in 2022? I’m not sure how much of an improvement we will see as long as Spencer Sanders is at QB. Despite being entrenched as the starter for the third straight season in 2021, Sanders posted the lowest completion percentage and yards per attempt of his college career. His 12 interceptions were also the most he’s had in a single season.

Is there Value on the Underdog Chippewas?

Jim McElwain’s group lost a few key starters to the NFL prior to this season, the biggest being offensive linemen Bernhard Raimann and Luke Goedeke and wide receiver Khalil Pimpleton. But Chips fans shouldn’t be too worried as 73% of the offense’s production is back, including QB Daniel Richardson and RB Lew Nichols.

Central Michigan does return the interior of it’s offensive line, they really enjoyed running the ball with Nichols behind them. They ran the ball a modest 51.4% of the time but Nichols led the nation in rushing yards with 1,848. They may not be able to find the same success against Oklahoma State as the Cowboys were perhaps the best D-line in the country last season. OK-State was 2nd in power success rate and 3rd in stuff rate.

Central Michigan’s Lew Nichols @LewNichols_ led the nation in rushing with 1848 yards, over 200 yards more than #2 on the list Kenneth Walker pic.twitter.com/pPZdM5BK7P

Richardson is the X-factor in keeping this game close. He was excellent when called upon, throwing 24 TD’s to just 6 INT’s and averaging 8.3 YPA. He’s still got Dallas Dixon to throw to, who posted 45 catches, 701 yards and 8 TD’s in 2021. As well as junior tight end Joel Wilson, who’s one of the MAC’s best receiving tight ends.

I like that this Central Michigan team has the ability to both put the ball in the air as well as on the ground. A one dimensional group against a defensive line as good as Oklahoma State’s would be difficult to overcome.

Despite CMU losing some talent to the transfer portal on defense, they were one of the best teams in the nation at causing havoc in the backfield. They were 4th in sacks and had the most tackles for loss. Oklahoma State will be relying heavily on a turnover prone Sanders with his lead back from last year, Jaylen Warren, departing.

The Chips have been able to load back up each and every season, they’re the class of the MAC and I think this is too many points. I don’t trust the Cowboys offense and Richardson should be able to take advantage of an uncertain secondary.