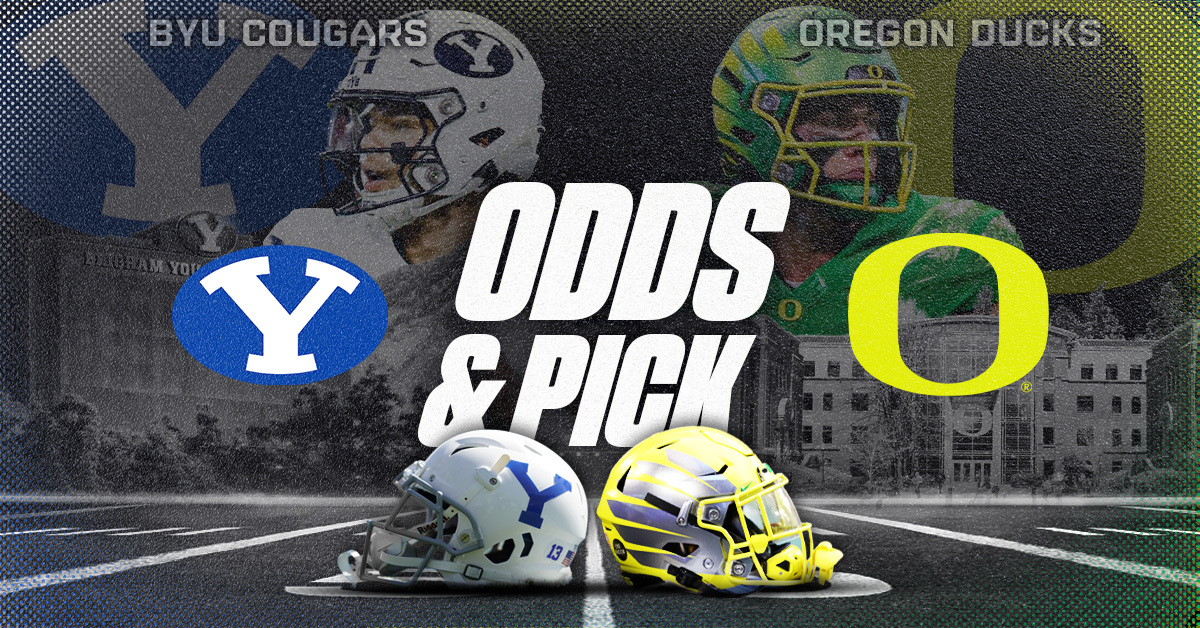 The West Coast has been waiting patiently for a team to stand out from the pack, and on Saturday, two top 25 teams will be competing to take the title of best in the West. The #12 BYU Cougars face off versus the #25 Oregon Ducks on Saturday, September 17th at 3:30 PM EST. The hometown Ducks are short home favorites in the BYU vs Oregon odds.

Let’s take a look at the College Football odds at BetMGM as we break down our best BYU vs Oregon betting pick.

Click the BetMGM bonus code ‘OWNERSBOX’ and get a $1,000 risk-free bet for BYU vs Oregon!

The Brigham Young Cougars are off to quite the start to their 2022 season. Beating USF and Baylor in back-to-back weeks and starting off the season 2-0. The experienced BYU team is led by many key veteran players on both sides of the ball, but their defense continues to impress.

They held Baylor to 20 points, only allowing 137 yards passing and ended up beating Baylor in double overtime. This is the first time all season that BYU enters a game as an underdog at +142 odds in the BYU vs Oregon odds. The hype around BYU is real and their team has unreal talent that could make a run coming into Bowl Season.

The Cougar’s defense is led by their linebacking core, fifth-year junior, Max Tooley. He leads the team in tackles and is the heart and soul of the defense. Tooley is joined by linebackers Ben Bywater and Keenan Pili who both return for their fourth year. The three of these studs have combined for 43 tackles in two games.

This BYU defense is relentless, and I see Bo Nix struggling to get any sort of success going against this team. Similar to what we saw with Georgia, I believe the Oregon offense will struggle to move the ball against this defense and mistakes will be made by the transfer quarterback.

The Oregon Team Total under 30.5 is a BYU vs Oregon betting pick worth looking at.

Oregon started off the 2022 season with a lot of hype around their new starting quarterback in Bo Nix and also welcomed rookie head coach Dan Lanning to the program.

As we have seen they had a somewhat slow start to the season with a brutal blowout loss to the National Champions, the Georgia Bulldogs. Georgia is on another level than most teams in the nation, so it is tough to come to terms with the idea that Oregon will still be a top team in the Pac-12 this season.

The Bulldogs were ready for Bo Nix in the backfield‼️ pic.twitter.com/VpJCGRth2K

Even though they lost Thibodeaux to the NFL, the Oregon Defense returned a familiar face in Brandon Dorlus. Four highly rated players in Brandon Dorlus, Christian Gonzalez, Noah Sewell, and Justin Flowe will look to wreak havoc on a BYU team that has yet to run into many issues on offense.

Don’t let Oregon’s Week 1 downfall cause you to overlook the talent they have on offense.

Oregon is home to one of the nation’s best tight ends in Cam McCormick. Oregon also brought in key transfers in running back, Mar’keise Irving, wide receiver, Chase Cota, and last but not least, quarterback Bo Nix.

This Oregon team has the potential to be Pac-12’s best team going into December, but it might take a few weeks to get the offense running up to speed with a new head coach and three transfers that are starting in key positions. The betting spread is sitting at around -3.5 in the BYU vs Oregon odds, but I wouldn’t be surprised if it moved to -3 before kickoff.

This game is quite an intriguing matchup with a top-ranked BYU team facing a dangerous team in the Oregon Ducks. There are many betting picks that are floating around for this matchup, but only one sticks out to me.

BYU returns the majority of their key starters on defense and filled any voids with transfers or third-fourth year players. The team ranks in the top 25 in almost every defensive category imaginable. With it being a home game for Oregon, I see the crowd causing big issues for this BYU offense. I also expect BYU to focus heavily on stopping Brandon Dorlus which will allow other players like Noah Sewell and Justin Flowe to step up and make big plays. Defense will step up on both sides.

Take the full game total under, and try to find good closing line value as the BYU vs Oregon odds are still fluctuating.