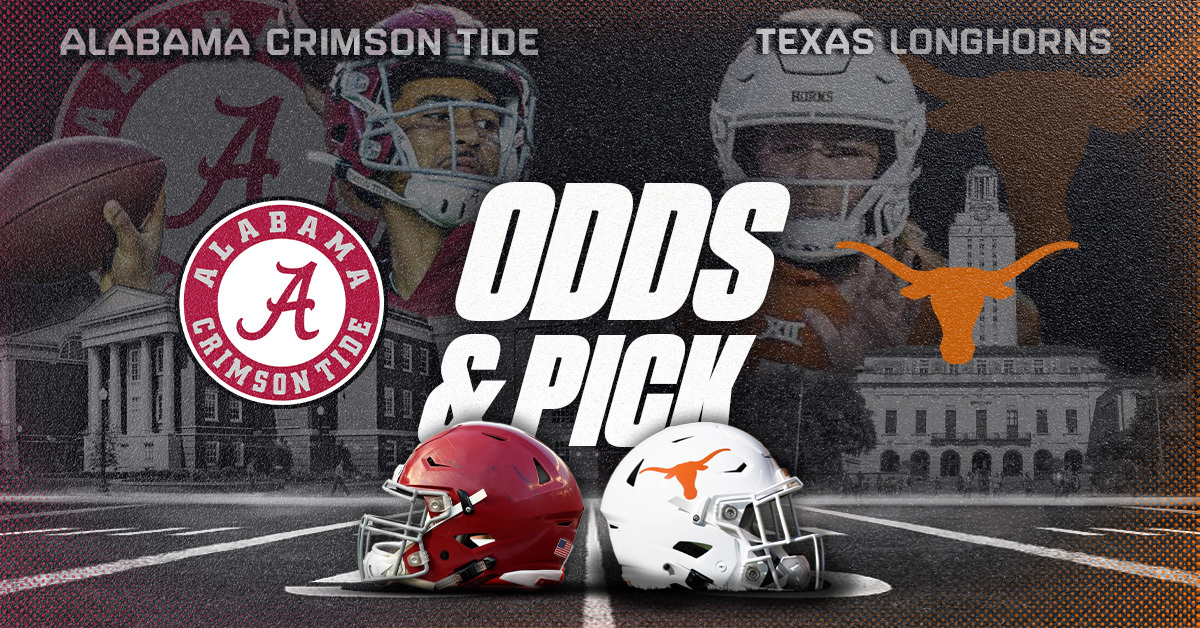 Two huge national brands meet in Week 2 of college football, for the first time since the 2010 National Championship. #1 Alabama will travel to Austin, to take on the Texas Longhorns. The game will take place at DKR Texas Memorial Stadium, at Noon EST on Saturday, September 10th. The Crimson Tide, to no surprise, are almost three touchdown favorites in the Alabama vs Texas odds.

Nick Saban and the always dangerous Crimson Tide, take on a young Quinn Ewers and his Longhorns in only his second career college start. Let’s take a look at the Alabama vs Texas odds at BetMGM Sportsbook and see where we can get some value.

Although Alabama vs Texas history isn’t too extensive, the Longhorns have won three out of the last five meetings. However, Alabama has won the most recent matchup in 2010.

Alabama and Texas are two of the most storied programs in the country. These two teams have combined for 1,873 wins all time.

The Tide absolutely beat up on Utah State in Week 1, 55-0. Bryce Young and Will Anderson anchor two of the best units in the country. Not only that, but they are both candidates in the Heisman Trophy odds.

Although it was against Utah State, the Tide offense hit at 100% on Red Zone scoring percentage and threw the ball at a 56% rate to the tune of seven yards per play. The defense gave up no points and had the 4th best third-down conversion percentage at only 17.65.

As long as this defense can win the turnover battle, this game should be a blood bath taking advantage of Quinn Ewer’s inexperience. Alabama football never rebuilds, they just retool and get better for the next season.

UPDATE: A former member of the Million Dollar Band has confirmed that the band will not be traveling to Austin, TX because of the proposed seating arrangements and limited number of seats.

Here’s a picture of the TCU band sitting where they wanted the MDB to sit. pic.twitter.com/DNLglIj0HO

For some reason, Nick Saban absolutely loves the marching band. Texas may have written their own death note, as they gave the band the worst seats in the stadium, which led to them ultimately not traveling, and that will not make Saban happy. I expect him to run it up on the Longhorns in honor of the band.

This is a welcome to the SEC game for Texas as to what is going to come for them in the next couple of years in conference play. Alabama is the cream of the crop in the SEC, and it will be interesting to see how Texas is going to match up. Even though Texas are favored in the Big 12 odds, they are massive underdogs in the Alabama vs Texas odds.

The time has come

The Longhorns won in Week 1 52-10 against the University Of Louisiana-Monroe Warhawks. Bijan Robinson looks like one of the premier backs in all of College Football once again and Quinn Ewers was solid in his first real action. Ja’Tavion Sanders had a great game, catching six passes for 85 yards and a score, and this offense could roll this year with these three contributors.

Will the Longhorns defense be able to keep their offense in the game? That’s my big question mark for a team that struggled to stop people down the stretch last season.

You do not get rich betting against Nick Saban, even if it’s almost a three-touchdown line.