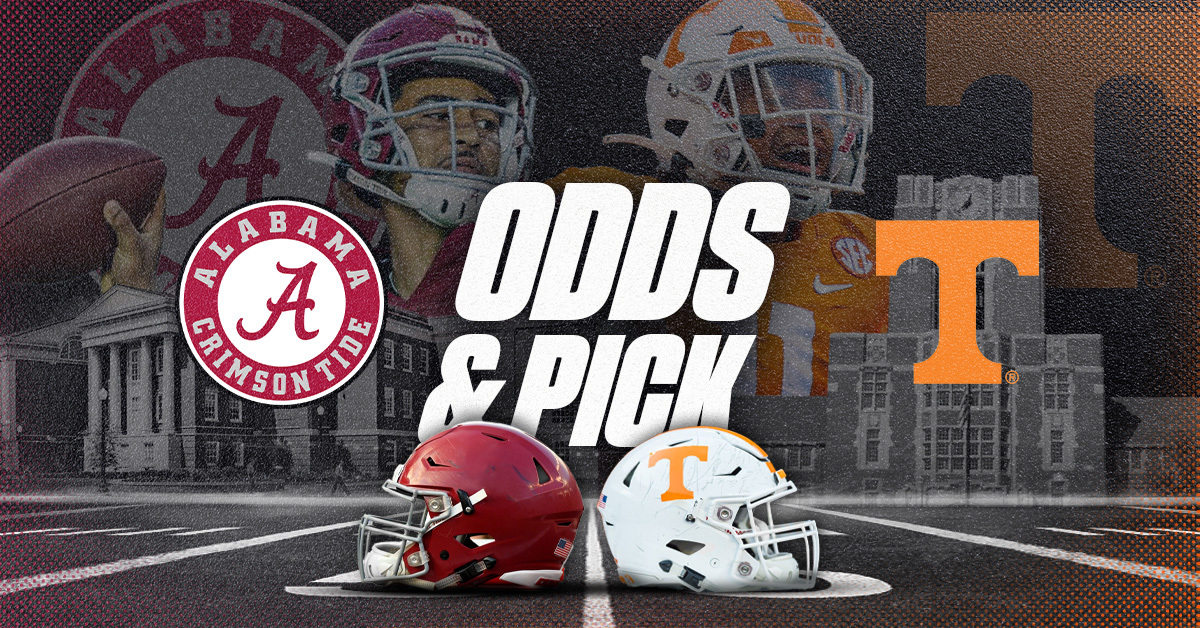 Saturday’s matchup between two of the best in the country has huge implications for the College Football Playoff. Alabama holds a 15-game winning streak between the two teams in the series, but Tennessee might have its best chance yet. The Volunteers will need a rowdy Knoxville crowd to keep the Alabama offense uncomfortable in crucial downs throughout the game. Set to take place on Saturday, October 15th at 3:30pm EST. Let’s take a look at the Alabama vs Tennessee odds at BetMGM.

Tennesse sports betting markets have increased this line a few points since opening, in the last 24 hours it’s made it’s way from -7 to even -9 at a few sportsbooks. Those looking to back the Volunteers can even find +9 at -105 odds at PointsBet as of the time of writing.

Alabama enters Saturday’s matchup with another year as one of the best rushing defenses in the nation. Allowing only 84.5 yards per game on the ground, this defense has caused issues for opposing offenses that attempt to open up their passing game via rushing early and often.

But Alabama’s strength lies within their rush defense and secondary, which can cause issues for this Tennessee team. Becoming one-dimensional on offense against this Alabama team could prove to be a death sentence.

According to PFF, the Alabama defense is the number one-ranked rush defense, and number three-ranked defense overall. With playmakers, like Will Anderson Jr, leading their linebacking core, it is tough for opposing quarterbacks to find enough time to target open receivers.

FBS leaders in QB pressures over the past two weeks:

We saw this in Alabama vs Arkansas game, where Arkansas became way too reliant on their rushing game. This allowed Alabama to pull ahead and keep the lead on a one-dimensional Arkansas team.

I look for an explosive performance from this Alabama defense, as this will be the biggest test to date for this Volunteer offense.

The Volunteers enter Saturday’s matchup as 8.5-point underdogs, and rightfully so. The Alabama team has shown minimal signs of weakness, most of which came during their early season matchup versus the Texas Longhorns.

If this Tennessee team wants any shot of winning this game, they will need a huge performance from their defense. As we have seen, the only way to have a shot at winning versus this highly talented Alabama team is to slow them down on offense.

Is this the weekend they turn things around? pic.twitter.com/GAZ8FKR9Yl

Alabama was held to 20 points versus Texas, and 24 points against Texas A&M. The 24 points versus A&M were without Bryce Young at the helm but these were by far the biggest tests that Alabama has faced on offense. Tennessee will need to mimic these performances if they want any shot of winning. A shootout will lead to an early demise and bring Tennessee their first loss of the season.

As of Friday, we are unclear if Bryce Young is set to play in this historic matchup between two top 10 SEC teams. But regardless, I don’t expect Young to be 100% if he does play.

I expect all emphasis to be on the defensive side of the ball for both teams. Especially for Tennessee, their only real shot of winning is to limit the Alabama offense and hold the time of possession advantage.

With it being a home game for the Volunteers, I expect mistakes to be made early. False Starts, illegal formations, you name it. The crowd will be a key factor in this game, as this might be their best chance to upset this Alabama team in over 15 years.

I am riding with a slow start and defensive battle from the moment the teams touch the field.