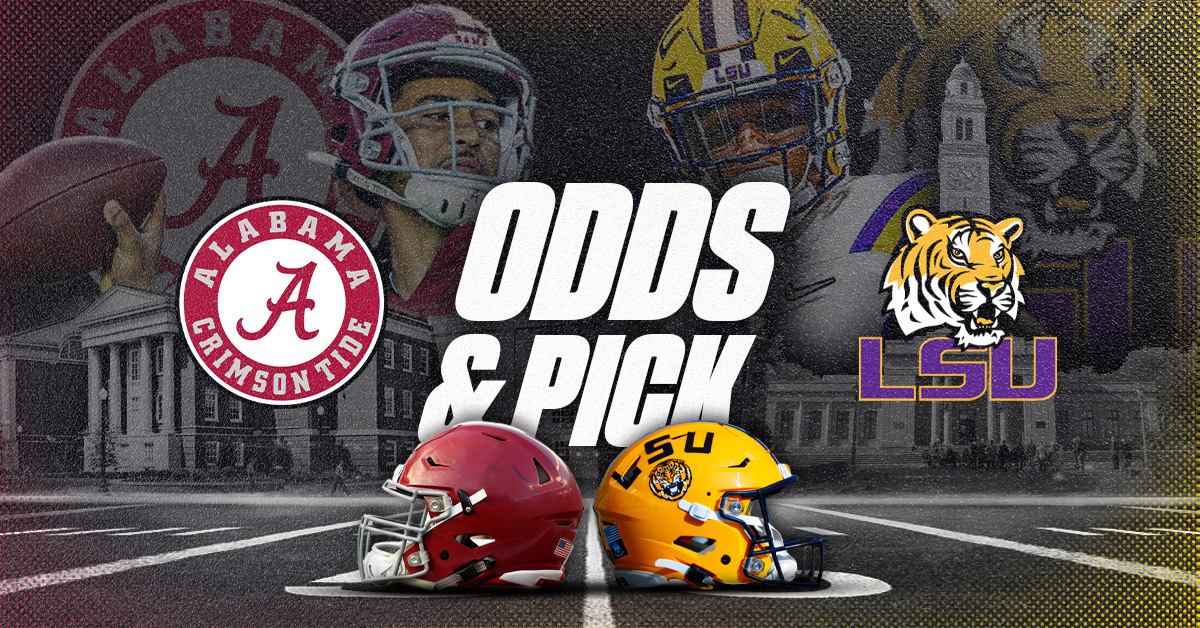 Week 10 of the college football season is here, and we have a big rivalry matchup between Alabama and LSU on Saturday. The #6 Crimson Tide are 7-1 on the season and 5-3 against the spread, while LSU has played some good ball, shooting up to #10 in the ranks at 6-2 and 5-3 ATS. This game is being played at Tiger Stadium at 7:00PM EST and will be broadcasted on ESPN. We’ll take a look at the Alabama vs LSU odds to see who has the upper hand.

Louisiana sports betting markets list the Tigers as near two touchdown home underdogs despite this being a top-10 ranked matchup. LSU is 4-1 against the spread this season at Tiger Stadium, while the Tide are 1-2 ATS on the road. With that being said, this spread opened at -13 and has now settle at 13.5 for most of the week.

Sign-up at DraftKings Sportsbook, bet $5 on any NFL team and win $200!

Nick Saban and the Tide are doing the thing they always do. A loss to a very good SEC team that will keep them close to the College Football Playoff picture even if they have some flaws. This Alabama team is really good, but who really knows the upside of how good Tennessee will really be. Bryce Young (1,906 Yards 18 TD 3 INT) and Jahmyr Gibbs (98 ATT 672 Yards 9 Total TD) lead this offense as the third best scoring offense in the country. The offensive unit scores 43.1 PPG and 485.4 Yards/Game (14th) and 6.9 Yards/Play (8th). The pass to run split is almost 50/50 for this offense, but are the most efficient team running the ball in the country, at 6.0 yards/rush. Through the air they rank in the 30s in almost all of the categories while completing 65% of their passes for 8.1 yards/pass.

The defense is led by Will Anderson Jr. who leads the team with 6 sacks and 1 INT. The Tide have the 6th ranked scoring defense, rank 5th in OPP Yards/Play and 4th in Opp 3D Conv %. The Tide are only giving up 2.7 yards/rush which is 2nd best in the country, and only 5.8 yards/pass which is 4th. All of these stats are even more impressive after giving up an incredible amount of yards to Tennessee. LSU isn’t close to Tennessee talent wise, and it should show in Death Valley.

This LSU team has played well, in a lot of close games, against a lot of really solid teams. Losing to Florida St and Tennessee but big wins over Ole Miss, Mississippi State and Florida show that if this team can score some points, then they have a chance. Jayden Daniels is the do it all man behind center, leading the team in passing yards as well as leading the team in rushing yards. Daniels is surrounded by talented pass catchers, that could burn the Alabama secondary like the Vols did last month. The Tigers offense doesn’t look nearly as good statistically as Bama. They are the 41st ranked scoring offense, with the 43rd ranked run offense and 62nd ranked pass offense. If they can use their great completion percentage and explosive play ability, they have a chance on Saturday.

Jayden Daniels has accounted for 11 of LSU’s 12 TDs in the last two games:

This LSU defensive line could cause so problems for Alabama, but the overall unit ranks 26th in the country in scoring defense. They are giving up 3.9 yards/rush and 7.5 yards/pass but are poor at getting off the field on 3rd down which is something that could hurt them. If LSU can win the turnover battle, then they should have a chance in this game.

I think this game is going to go over the total, and am surprised it is so low. But a nice little nugget I like is going to be the first quarter total. I think we will get more than 13 points in the first quarter, and at -105 I love the odds. Sure it will be difficult for Alabama to play at Death Valley, but they have done it before.